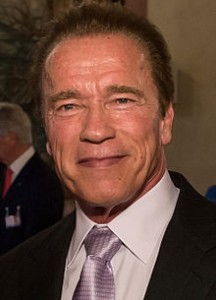 Schwarzenegger began weight training at the age of 15. He won the Mr. Universe title at age 20 and went on to win the Mr. Olympia contest seven times. Schwarzenegger has remained a prominent presence in bodybuilding and has written many books and articles on the sport. Schwarzenegger gained worldwide fame as a Hollywood action film icon. Schwarzenegger’s breakthrough film was the sword-and-sorcery epic Conan the Barbarian in 1982, which was a box-office hit and resulted in a sequel.[2] In 1984, he appeared in James Cameron‘s science-fiction thriller film The Terminator, which was a massive critical and box-office success. Schwarzenegger subsequently reprised the Terminator character in the franchise’s later installments in 1991, 2003, and 2015.[2][3][4] He appeared in a number of successful films, such as Commando(1985), The Running Man (1987), Predator (1987), Twins (1988), Total Recall (1990), Kindergarten Cop (1990) and True Lies (1994). He was nicknamed the “Austrian Oak” and the “Styrian Oak” in his bodybuilding days, “Arnie” during his acting career, and “The Governator” (a portmanteau of “Governor” and “The Terminator” – one of his best-known movie roles) since the start of his political career.[5]

As a Republican, he was first elected on October 7, 2003, in a special recall election to replace then-Governor Gray Davis. Schwarzenegger was sworn in on November 17, 2003, to serve the remainder of Davis’s term. Schwarzenegger was then re-elected on November 7, 2006, in California’s 2006 gubernatorial election, to serve a full term as governor, defeating Democrat Phil Angelides, who was California State Treasurerat the time. Schwarzenegger was sworn in for his second term on January 5, 2007.[6] In 2011, Schwarzenegger completed his second term as governor, and it was announced that he had separated from Maria Shriver, his wife for the previous 25 years; she is a member of the influential Kennedy family, as a niece of the late Democratic US President John F. Kennedy. On January 26, 2015, he was announced as the second inductee into the WWE Hall of Fame class of 2015.[7]

Warning: count(): Parameter must be an array or an object that implements Countable in /home/.sites/949/site1633913/web/wp-includes/class-wp-comment-query.php on line 399